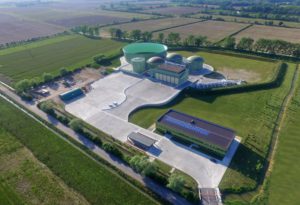 Visit their website, see the factsheet, explore an illustration of the technology, process and products and watch the video.

Plant description:The Acqua & Sole (A&S) anaerobic digestion plant is located in Vellezzo Bellini (Northern Italy), in an area dedicated to cereal cultivation, mainly rice. The main focus of A&S is the creation of environmental services that are required for a sustainable agriculture in peri-urban areas. A&S utilises sewage sludge from municipal WWTPs as major feedstock and aims to showcase that the use of digestate is a safe and environmentally friendly alternative to incineration (the co-digestion capacity is 120 kiloton (kt) organic feedstock per year). A&S produces an organic pumpable fertiliser (the digestate) from sewage sludge and agro-food biowaste to be used as nutrients and carbon source on the fields located in the region of the plant. Due to the thermophilic digestion process, the digestate is hygienised and highly stabilised. Anearobic digestion under thermophillic conditions requires control of ammonia levels in order to prevent toxic conditions in the digester. Aqua&Sole therefore invested in an advanced nitrogen stripper which is expected to remove up till 40% of the ammonia from the liquid digestate which is subsequently recovered as AS. The AS is accepted and traded as an alternative for chemical fertilizers.

A&S has a strong focus on nutrient recycling with special attention to the development of an efficient digestate distribution system (direct injection into the soil). This system has been developed in strict collaboration with local farmers with the aim to maximise fertilisation effects and minimize odour and ammonia (NH3) emissions. In addition to the production of digestate, the plant generates ammonium sulphate (AS) solution by recovering the NH3 released during the AD process.

Innovations:  Acqua & Sole has implemented a  novel N-absorber that is made by high performance material (Alloy 825), which allows to reach higher process temperature and it is also more acid-resistant; the novel scrubber design enables a higher gas flow rate, which in turn increases the amount of N recovered.

The implementation of the N-absorber reduces the ammonia content in digesting sludge avoiding the inhibition of the AD process and producing high-quality AS solution. During Systemic project, Acqua & Sole worked in close collaboration with University of Milan.

Mass- and Energy balances: During 2020, Aqua & Sole specific biogas production amounts to 38 m3 biogas per tonne of feedstock.. The low biogas production compared to the other demoplants is caused by the feedstock composition: 85% of sewage sludge and only 15% of organic residues from agro-food industry. Nevertheless, on-site consumption of electricity and heat are fully covered by energy from biogas.

Aqua & Sole turns sewage sludge into renewable energy and fertilising products, thereby avoiding losses of nutrients and organic matter through incineration which is the alternative disposal practice. No residues of pharmaceuticals were detected in digestate and ammonium sulphate pointing to breakdown of these compounds during thermophilic digestion.

Aqua & Sole’s receives a gate fee of about 90 euro per tonne for the intake of sewage sludge. Revenues for green energy are low, however, due to the lack of a support system in Italy. Digestate is applied free of charge.

About us (choose your language)